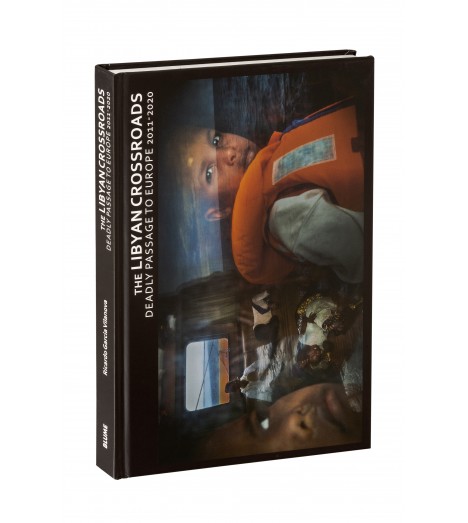 Foreword 6
Rescue at sea
Detention centres on Libyan territory 9
The sleep of reason produces
monsters [etchings from the series
Los Caprichos by Goya] 10
Map of Libya (War Zones, Detention
Centres, Beach Departure Points) 64
The Libyan crossroads: the human
stories leading to them 66
Libya. The Three wars 71
In times of War, the law falls silent
[Cicero] 72
Home countries 107
Equality for those who are equal,
inequality for those who are unequal
[Friedrich Wilhelm Nietzsche] 108

Ricardo Garcia Vilanova is a Spanish video and photojournalist, based in Barcelona. He has spent more than fifteen years specialising in conflict and humanitarian crises. In recent years he has worked in Syria, Libya, Iraq, Afghanistan, Gaza, Yemen, Nigeria, Chad, Haiti, Lebanon, Tunisia, Egypt and Bangladesh, as well as in other countries. From 2011 he documented the Arab Spring uprisings, and has been following the subsequent conflicts and crises. His work has been widely published, including in the world’s most prestigious newspapers and magazines. He has also exhibited his work in several cities around the world. He has earned numerous national and international awards recognising the quality of his work and his commitment to photography and photojournalism.